The farm has currently 15 apple trees with 21 more planted this Autumn. In October this years crop were used make our first batch of Cider. After a technical hitch (the Docs juicer broke)  enough juice was found for an initial brew  (5 gallons) to debut during the 6 Nations Rugby Championship. 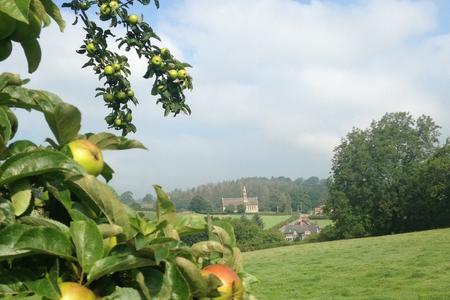 ​​​​There's no such thing as the bad weather just you have the wrong clothes' so be prepared!  Wellies or walking boots  are a must, they also instantly define you as a local.

Take a coat, temperatures drop 3 degrees per thousand feet, so after that glorious drive to the top of a mountain it is not going to be like the Algarve as you take a stroll around.

The main roads are brilliant with very little traffic. The farm is and hour and twenty from Cardiff or Swansea, 1 hour to Hereford.  Brecon , Llandovery and Llanidloes 35 mins,  Hay on Wye and Kington 25 mins ,Rhayader and Llandrindod Wells 15 mins, and Builth Wells 3 minutes. There is a huge Tesco supermarket in Llandrindod Wells and two smaller supermarkets in Builth Wells.  Builth Road railway station is a half mile walk away. There are several taxi firms in Builth.

Below is a list of local sites that may be of interest.

Mid Wales   Herefordshire  - official tourist sites - plough through these as someone has been paid to do this properly, unlike this site.